I've been brewing since 1998 and I'm still amazed of the types of beers you can make with just four ingredients. I brew because it's pretty easy to make some amazing beers.  I've enjoyed beers from all over Europe and I'm impressed with the craft beer emergence over the last 10 years in North America.  I love many types of beers. I appreciate how Europe takes beer seriously and presents beer correctly in every way. I enjoy local beers no matter where I am with only few exceptions. S. Korea kind of did me in when they add ice to warm beer.

I brewed 5 or 10  gallon all grain batches.  I grow my own hops yielding about 3 lbs (dried) which lasts for a few wonderful IPAs.. 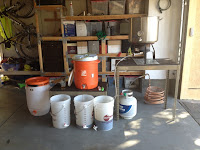 I  break brewing into four parts.

1. Mashing (steeping your tea leaves)
2. Boiling (cooking something good with spice)
3. Fermentation (letting the little creatures do their thing)
4. Lagering (letting everything mellow out to perfection)

I used to do a three stage batch mash. I felt this resulted in a good efficiency but it was slow and tedious. I've now simplified by doing a 1) single mash some where between 148 F and 156 F and then 2) sparge at 170F. The spent grain tastes less sweet and the process is easier and quicker.

1) I use an eski or a thermos from my local hardware store with a false bottom. It has a 10 gallon capacity which works great however it's a bit small for 10 gallon high gravity brews. It holds a maximum of 25 lbs of grain. The concept of the Brewer's Window is very important. So is the accuracy of your thermometer. Mashing at temperatures as low as 148F will give you lots of fermentable sugars but less malt flavours. Mashing at 156F will give you less fermentables but more malt flavours. I've had some batches that I've accidentally mashed above 158F and they resulted in good beers but have less than 2% ABV. The beers are nice but having more than two beer in one night proves very filling.

It's super important that you have an accurate thermometer. Without it you may be mashing at the wrong temperature and your results will change a lot.

2) After I drain the the mash I start sparging at 170F. The temperature is interesting here due to the fact that this is considered the highest temperature you can use without getting nasty tannins.  Higher temperature help your sparge flow and avoid stuck mashes. I generally produce a total of 13 gallons for a 10 gallon batch and 7 gallons for a 5 gallon batch.

The way I sparge/lauter is very simple. I place a plastic lid over the grains that has many small holes drilled in it. I then slowly pour the hot water on this lid and collect the wort from the run off. I make sure the water pouring on the lid and exiting the wort are about the same rate.

Decoction Mash -  Some beers, specifically heavier stouts I feel I get better results when doing a two step mash. First at at least 40 mins at 148-150F and then for 40 mins at 154F to 158F. The first mash gets the sugars (scarification step) and the second pulls more malty flavours and body from the grain. This two step process is done by removing about 1.5 gallons from the wort and boiling it and then adding it back to the mash.

This process is about taking the wort and flavoring it with adjuncts, most notably hops.  When the wort starts to boil is goes through a stage called "break". This is essentially boiling until all the foam disappears. This is also the time when I start the 60 minute count down and begin adding ingredients. Most of my batches consist of bittering hops (60 to 45 mins additions), flavour hops (30 to 10 mins) and aroma (5 minutes to flame out).  The biggest variable here is the 100s of type of hops you can use. Some other recipes get adjuncts other than hops typically within the last 5 minutes. Orange peal, coriander, etc.

Hops additions are really interesting. Here's were we home brewers have it over the big beer companies. We can try new hops in ways breweries just can't afford. For many Ales I use Magnum to bitter and then use Simcoe, Columbus, Cascade and Centennial to flavour and add aroma.  For European style beers I to use noble hops and for English Bitters I stick to Kent Golding and Fuggle. There are new hops hitting the market all the time.

When the hour is up I use a 50 ft 1/2 copper coil to cool the wort down to 100F and then drain it into a carboy for fermentation. For heavy gravity brews (above 1.070 OG) I will oxygenate for 2 minutes.

I add the un-sanitized cooper coil into the boil with 20 minutes left. The boil cleans the coil. I add a fining agent at this time too (Whirfloc).

Once the wort has cooled to about 80F to 95F I pitch the yeast. I prefer the dry yeasts because they are not messy and deliver great results. I've done starters in the past but typically now just add the yeast when the wort is still warm. I've had great success with Ales and Lagers doing this.

During the colder months I can ferment at about 68F in the house. During the warmer months I use a dedicated freezer chest with the temperature control.

As soon as fermentation has stopped I wait about 2 to 7 days and then place in secondary or a keg. Final gravity should be below 1.020 however some tasty malts have left me with a FG of 1.028. Not an issue. This is generally a result of high mash temperatures.

If the beer requires secondary I will drain primary into a new container and add the new ingredients  This might include licorice, coffee, chocolate nibs, oak chips, licorice root, sugars including candi and molasses. Some of this is soaked in vodka/rum to pull out the flavours and sanitize the adjunct. For example I soak chocolate nibs with vodka for 24 hours and then add the whole thing to secondary.

Ideally after fermentation and cold crashing I'll add pellets to the beer for a week to a month at about 65F. Hop leafs create more frothy flavours however they soak up so much beer I choose pellets. I do not sanitize the hops and have never had an issue. The results greatly depend on the quality of hops. Typical hops that render great results are Chinook, Willamette,  Centennial, Columbus/Zeus, Warrior, Cascade. Nobel hops are not ideal here due to there lower aroma and softer qualities.

At this stage I have found that 3 to 5 weeks in cold storage makes good beers great. This is most pronounced with hops. The profile of hops changes a lot over even a 2 week period. One batch I brewed was first like a hop explosion and then weeks later it turned into a mellow hops flavour.

For lagers this is a must. My lagers come out smelling like rotten eggs and within 4 to 5 weeks become works of art.

A few distilleries sell used barrels. The sizes of these barrels at either 5 of 8 gallons. Generally I fill them up with a beer that can develop along with the Rye, Oak of other flavours. Small barrels mean a larger surface to volume ratio so generally you only need weeks in the barrel. 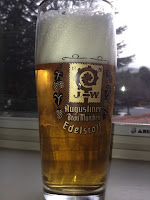 I've used this process to make American style IPA, Reds, Stouts, Wheat Beers, Belgium beers  and many other types. It amazes me that just four ingredients can create so many different styles of beer and taste so good.

Posted by Nightbrewer No comments:


What makes this recipe interesting is that the resulting beer is a "typical Stout". Mouth feel, ABV, malt flavour are all what I would consider a pleasant stout. This recipe could be used to be the base of more interesting stouts. For example adding Peat flavoured Malts could result in an amazing stout.

Comments
Smooth tasting, full body stout. No hint of chocolate just smooth malt flavor. Shows a nice brownish head typical of stouts. Seems like a good base for future stouts. Lite on ABV at an estimated 4%.

Next time either up base malt or add dextrose to give this some kick. Focus on secondary with either vanilla and nibs or licorice or nothing. Only add buttering hops. Flavor hops are lost in the malt.
Posted by Nightbrewer No comments: