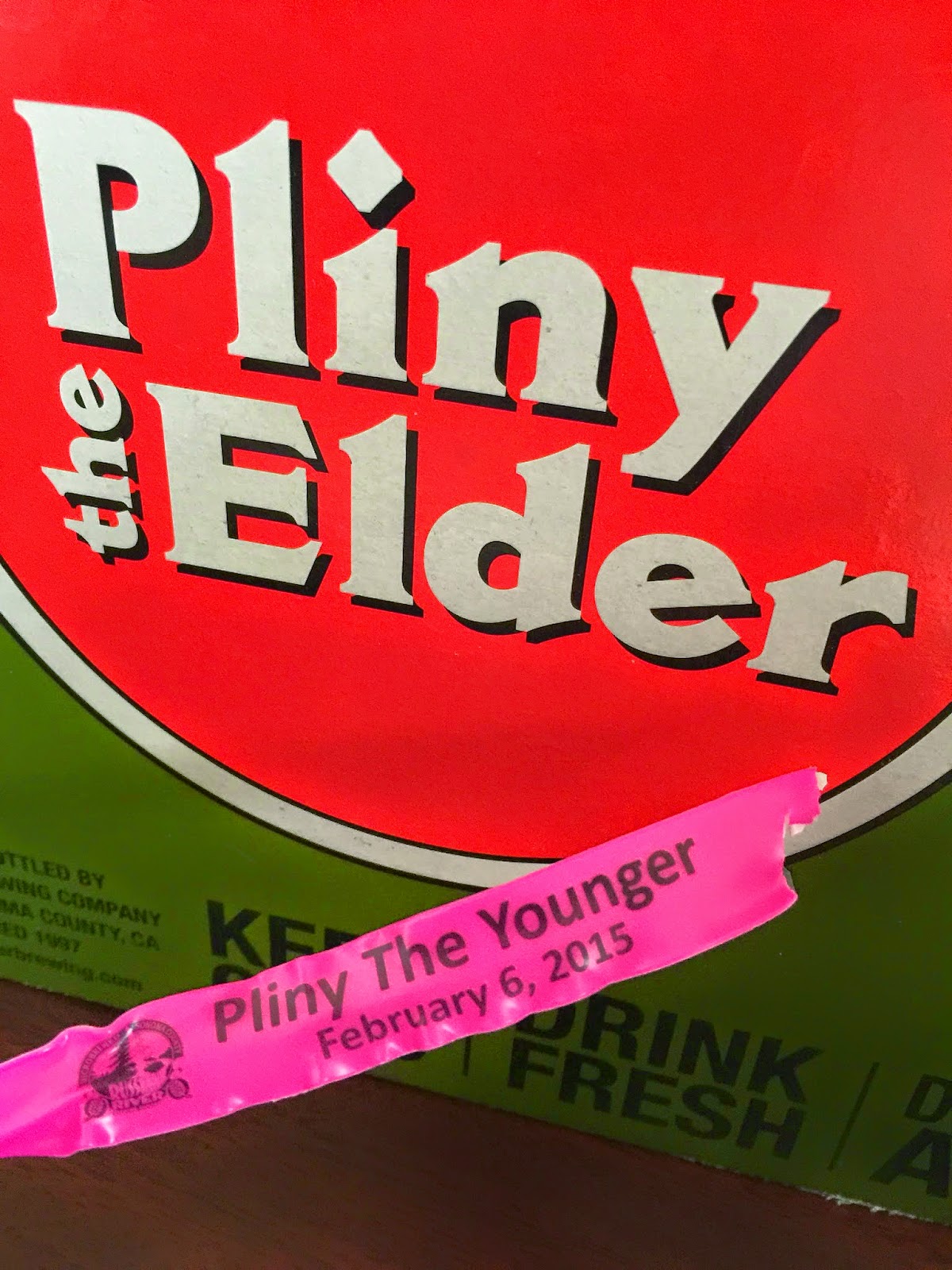 After hearing all the hoopla over the last few years we made the pilgrimage to Santa Rosa for Pliny the Younger. I've been looking forward to this over the last few months. I'm a big fan of hops and appreciated Pliny the Elder, Moylands Hopsicle, Sierra Nevada hoppier beers and  many others. Although some bars do serve the Younger, it's generally an opportunity you line up for and the bar typically runs out after rationing in 10 oz glasses within an hour. Considering all the demand for this beer and my appreciation for Pliny the Elder I had high hopes.

Arrived around 3:00pm on Friday we were greeted with rain in Santa Rosa.  We headed directly to RRB. The line up was pretty impressive. It was about 2 blocks long and were told it was a 4 hour wait. Most of the people in line were from out of town. Earlier in the day the line up wrapped around the block for a 5 + hour wait. Several people camped out the night before. We were told that the people near the front of the line at 3:00pm had been there since 7:00 AM. Line ups were said to go 'more smoothly' due to the 3 hour time limit once in the bar (this was self policed and soon forgotten by everyone inside). We skipped the line and headed inside to purchase some RRB beer at their bar store. Sadly no Younger is available to purchase.  We loaded up on Blind Pig and Pliny the Elder then headed back to the hotel.

After a great dinner at Jackson's, which we enjoyed  immensely, we headed back to try our luck in line. We found a 2 hour line that was relatively short to what we experienced earlier in the day so we stuck it out. The wait was not too bad in the rain since RRB placed awning to shelter us.  Prior to getting in you get a pink bracelet with three Pliny the Younger tickets. 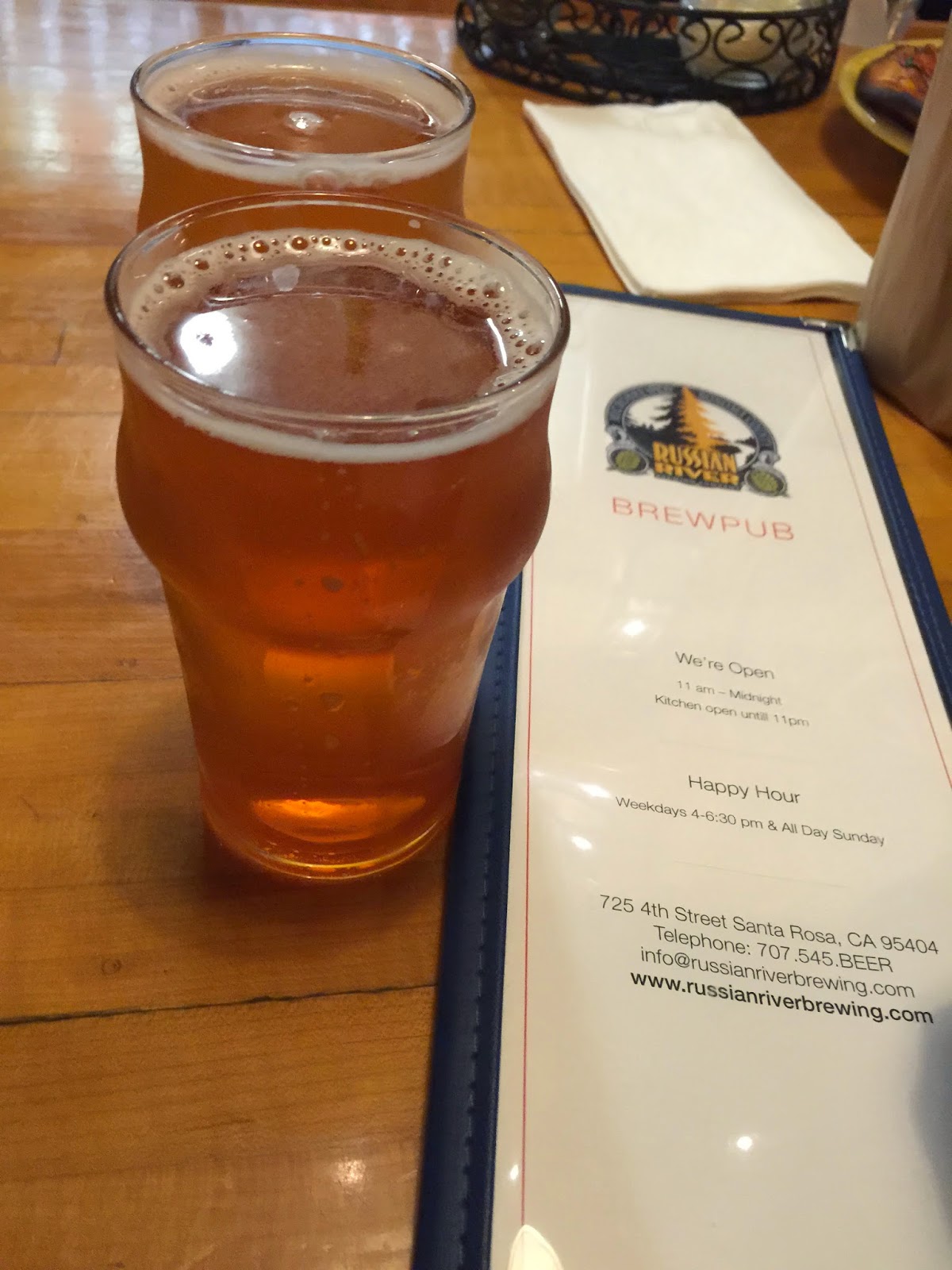 So we ordered our Pliny the Younger and prepared to be amazed. Served in a 10 oz glass. 10.5 ABV, low to no aroma, clear lite and very dry. Heavy hop flavors with no dominant citrus or piney. What I was drinking was a very dry very hoppy flavored beer. No malt flavors. I was really disappointed in the lack of flavor and complexity. This beer to me was about delivering a well rounded hop flavor in a high ABV low malt profile. Compared to the Elder this beer lacks flavour and seems unbalanced. With other triple IPAs I taste a better balance of malts and hops. Is this a bad beer? No it's just a style that to me was not worthy of a second glass. I gave my two remaining tickets to our line mates and proceeded to begin to taste some of the other beers RRB serves.

I really enjoy RRB. Their selection of beers, their pizzas and the atmosphere make this a great bar. However I would recommend coming when Younger is not served. This will let you get in without a long line up.

As a brewer myself I'm glad to see the awareness build with craft beers however I believe this beer is over hyped because of three things. 1) It's scarcity, 2)  peoples expectation that it's better the Pliny the Elder and 3) 10.5 ABV.

Well done RRB but I'll stick to your other beers which I feel deserve more attention than Pliny the Younger.

Want to try Triple IPAs that I think are better. Check out Stone, Moyland and Knee Deep.
Posted by Nightbrewer No comments: