Below are 3 Stouts that are all very successful. The 3rd strays from the Guinness recipe with Chocolate Wheat and Cold Press coffee but it's still creamy and wonderful. Guinness has got to one of the easiest beers to replicate.


I've had my eye on making a Guinness clone for a long time but it was not until earlier this year I purchased the Nitrogen/CO2 tank and Nitro tap to dispense this stout in the style it deserves. This is my first attempt at a Guinness clone. There are a few recipes of Guinness on the web and I took a middle of the road approach with some of the ingredients. I've never seen a 'certified' or 'this is it' recipe. I was hoping for some hints when I visited  Guinness Factory in Dublin. It was a real treat but they were not about to give away their recipe. They did mention that they used non-milled roasted grain in their beer but that really wasn't helping me much.

MY GOAL - What am I aiming for with this recipe? Two traits, creaminess and drink-ability. The head needs to be thick creamy and persistent. The stout needs to slip down the gullet and not fill you up.

MAKING GUINNESS - This recipe is is very simple. Three grains. Base malt, roasted barley and flaked barley for the foam. I mashed at 153F to give a bit of body. The boil was again simple. 60 mins with two hop additions.

HOPS - When it came to hops I want to create the flavour that many refer to as the sourness or slight nip. I chose Northern Brewer for my bittering hop and Cascade for my flavour hop. I know Guinness does not use these hops but I figured that hops are not the star of the show here and I consider these two hops are very clean tasting. Next time I'd try this with more traditional hops but I don't think it would change things much. Some recipes call for adding a can of Guinness that has been open and stood at room temperature for three days. To me this just does not seem right from the point of view of creating your own beer from scratch.

This fermented in about 5 days to its FG. I let it rest for 3 more days and then kegged it.

DISPENSING A GUINNESS - This beer should be kegged with Beer Gas. Getting this beer to be 'nitro'ed' is simple.


1. Pressurize to 40 PSI with beer gas (75% Nitrogen and 25% CO2). It's important to note that I have a defusing stone that adds beer gas into the beer instead of the typical pressurizing the gas cavity at the top of your keg. Without this stone it took meet about 2 weeks to get similar results.

3. Pouring a Guinness the right way is important. Pour into a room temperature glass 2/3 full and let rest until it has settled to black. Then complete the pour and serve. Drink only after the Guinness has had a chance to stop it's cascading.  Failing to do this does affect the texture of the stout.

NITROGEN GAS - A nitro tap is different in the way is pours beer. There is a small widget in the tap that basically does the whole Pespi-Mentos experiment while pouring. The Beer Gas is at 40 psi that pushes the beer through the tap. Beer gas is 75% nitro and 25% CO2. Some Nitro does get mixed into the Guinness and this is important however the quality of Nitro is that it generally is very hard to mix with Guinness so the added gas is minimal. Nitro allows the Guinness to be under high pressure without foaming to much. The Nitro creates a finer bubble and smoother head.

This keg will go fast and considering how easy this was and how well it turned out, I'm doing it again soon.

This clone truly is a clone. Very very similar to the real thing. Beer was a tad on the bitter side towards the final pints.

Brewed Guinness again. Similar ingredients (Maris Otter) as above using 1 oz KG hops at 60 min and 1 oz Fuggle at 15 min . (I should have switched the hops, KG has better flavour and is more in keeping with UK style beers.)


Despite this being the same recipe this came out with more alcohol, more body and more dark barley flavour. Still excellent but this does not taste identical to Guinness like the first batch. This is kind of like its older brother. Bit more body and so a little less drinkable than the first.

Next time use 2-Row not Maris Otter and mash at 153F. Sparge to produce 6 gallons and boil down to 5.2 gallons. This means light boil for 45 minutes and harder boil for the last 15 minutes. 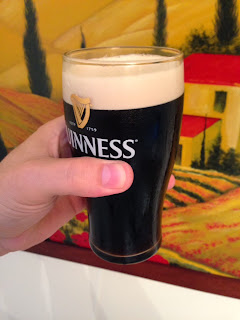 Well two things are different with this batch. Roasted Barley was substituted with Chocolate Wheat and I've added 2 oz of Acidulated Malt. The Chocolate malt was done based on the availability of the malts at Morebeer. From early tastes this is getting me thinking of doing a Red Stout. I would replace the Roasted Barley with Red Cara Malt. The acidic malt is done to test out comments on the internet brew forums that this adds the Guinness sour twang. We will see.

Comments: taste wort prior to fermentation. Lite and chocolaty. Chocolate wheat comes across liter and more chocolaty that its barley chocolate brother.

I added cold brewed coffee. Twice I added 10 table spoons of medium ground medium coffee grounds to a 2/3 full cold water french press over night and then added the coffee to the keg. This has resulted in a stout with a mild coffee aroma and coffee flavour that adds a wonderful dimension to the stout.
Posted by Nightbrewer